Posted by The Inconvenient Truth Behind Waiting For Superman ⋅ June 15, 2009 ⋅ Leave a comment

Grassroots Education Movement (GEM) members Angel Gonzalez and Pam Garrison went up to Co-op City to support the parents and teachers at PS 160 who are fighting off the imposition of a charter school in their building. The original application for the charter was for District 11, which does not have as much of a middle class population to draw from as District 12 with Co-op City. So they are trying to switch horses in midstream. Talk about creaming.

by Pam Garrison
June 11, 2009– A Equality Charter School revision meeting took place at P.S. 160 in District 11 – Bronx where changes to its charter proposal for its placement at this Co-op City zoned elementary school were to be discussed. Equality Charter School plans to open with 132 sixth graders and eventually would become a 6th-12th grade secondary school with a total population of 414 students. Instead of a discussion on the proposed revisions, 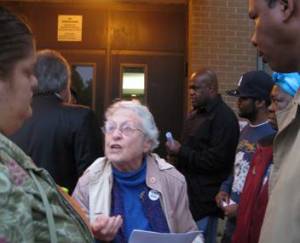 the meeting, with close to 100 people including young students, generated a raucous and sometimes hostile exchange over whether this Charter Middle School should be placed at PS 160 at all.
The announcement of the placement of the Equality Charter at PS 160 caught many off guard and has divided the community as well as the PS 160 PTA. Its co-president, Mona Davids, who now also heads a newly created Citywide Pro-Charters Parent Association, rallied speakers in favor and an audience who displayed pro-Equality Charter signs whenever opposition voices spoke. Co-president Sebastian Ulanga, has organized against this siting of this Equality Charter here and spoke along with others against the lack proper consultation, misinformation (Equality had been processed for District 12), the negative impacts of middle school youth on PS 160 younger elementary and the special education students. While the pro-charter speakers voiced excitement about the expected higher attention, resources, and smaller class sizes with the Equality Charter there, opposition speakers expressed anger that the projected benefits would not be for the entire school population and create disparity.

Grassroots Education Movement member, Angel Gonzalez, spoke about the need to fix instead of privatizing our schools with charters. “We need to support quality and democratic processes for all public scho 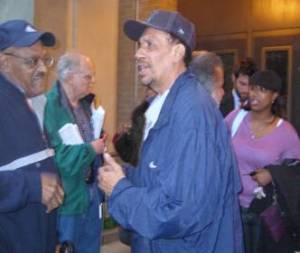 ols. Charter schools, such as Equality Charter, split communities and sow inequality instead. They ‘cream the best students’ and evidence shows that charters service fewer percentages of the neediest of students such English Language Learners, Special Education and the poorest of the poor. We need to organize a citywide fight-back against the mayor’s undemocratic imposition of these charters that take away resources from public schools. Charters union-bust and undermine the necessary unity parents and teachers against government’s failure to properly provide for all public schools.”

Jeffrey Litt, the Superintendent of this Carl Icahn Network of Charter Schools (which includes Equality Charter), expressed his support for the placement of Equality Charter at PS 160 while simultaneously engaging in a tense verbal exchange with an audience member who opposed the charter and Mr. Litt’s assertions. Mr. Litt claimed that Icahn schools do service the poor and are not exclusive, but PTA’s Mr. Ulanga interjected that any entry-lottery process for selecting students are exclusive.

Revisions to Equality’s Charter were presented at the beginning of the meeting. These included some administrative and staffing changes along with its placement now in District 11 instead of District 12. At the end of the meeting, many audience members were unable to determine the actual revisions that were being proposed – they were never restated for many who had arrived late. The meeting, which was adjourned in a particularly abrupt manner, appeared to do little to alleviate the fears, concerns and questions of many audience members. The rift, that this Equality Charter School has spawned, left many confused with many unanswered questions.