Posted by The Inconvenient Truth Behind Waiting For Superman ⋅ September 13, 2009 ⋅ 3 Comments

and GET READY TO BE SHOCKED

Parents speak out, see pictures of the rooms.

One telling moment at around 6:32-6:45 — The charter schools kids are being lined up against the wall of the building. They’re obviously a little frightened in the hubbub and it is not clear why they have to be there at all instead of being taken inside. The demonstrators are certainly not preventing them from entering the building. One certainly has to question what’s going on here.

On this very first day of classes, early at 6:30AM, the Community Public School 123, the Harlem Success Academy (HSA), an invading Private Charter School in the same public building on 141 St., and the Dept of Education (DOE), were unusually treated on the street to a excellent hands-on lesson in justice, equality and democracy.

Arriving parents and children were greeted by a spirited yet outraged group of 25 parents, teachers from other schools, and education activists who picketed outside with signs and chants.

The protest denounced the chaos precipitated by the HSA charter takeover of PS 123 classrooms, the disarray to their supplies and furnishings, the DOE’s dictatorial imposition of charter schools, privatization and the resulting “separate and unequal” conditions.

Since the spring, PS 123 parents and teachers have been organizing against the disparities in treatment and are vowing to keep up the struggle to stop this discriminatory, unequal, and emotionally damaging learning environment. They have also vowed to continue to provide a successful education for their PS 123 students despite the unfavorable odds. 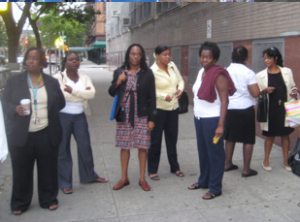 About ten PS 123 African-American teachers stood close by in solidarity during Wednesday’s protest, but did not join the picket line. The fact that the UFT and DOE had asked them not to shows a total lack of leadership and insensitivity in the face of these glaring, unjust and stressful conditions at PS 123. Mr. Michael McDuffy, of the DOE Office that approves charters, was present but would make no comment.

The invasion and takeover of PS 123’s public school space by Eva Moskowitz’s Charter School, facilitated by Mayor Bloomberg’s dictatorial control of schools, have divided this Harlem facility. It is important to note that by DOE standards, PS 123 was not even a failing school: it received a grade of A for 2008/9. Despite its obvious success, PS 123 students are not seeing the same kinds of classroom renovations and supplies that the lottery-selected HSA charter students have been treated to, even though all students share the same building. 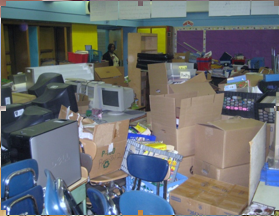 Upon returning to work this Tuesday, tensions flared up again when PS 123 teachers found their first and second floor rooms and corridors in an unwieldy mess (right). As the HSA charter took over the third floor this summer, their movers had evicted the PS 123 teacher materials and consequently left PS 123 books and supplies in disarray. The DOE, UFT officials, and politicians, all of whom had been apprised of the impending chaos, did nothing over the summer. At the start of this new school year, the HSA charter had its entire third floor facilities immaculately cleaned, freshly painted and newly supplied with modern lighting fixtures, toilets, doors, furniture, air conditioning, rugs and smart-board computer technology. HSA also has smaller class sizes. 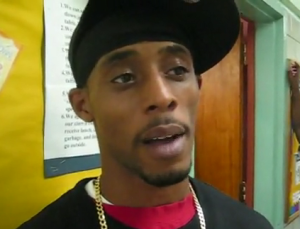 The disparate conditions angered some PS 123 parents. Betty Barriento remarked, “We want all our children at PS 123 to have the same super-excellent facilities and opportunities. There should be no exceptions to good quality.” William Hargraves, a parent activist, said that PS 123 students are not allowed to use the HSA toilets or pass through their hallways and stairways. After seeing the HSA elite conditions, parent Chris Singleton sadly reacted, “I feel as if my fourth grade daughter is being raped.” 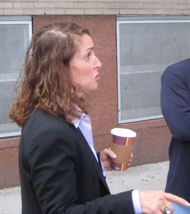 Moskowitz (left), who stood nearby welcoming students, pays herself $360,000+ yearly – a blatant misappropriation of monies that should be earmarked instead to upgrade services for all of PS 123. If Moskowitz had appropriated these funds under our public school system, she would have been indicted for grand larceny.

[Charters by law are exempted from such public oversight, laws and regulations. See “The Truth About Charters” brochure.]

Angel Gonzalez of the Grassroots Education Movement likened Moskowitz to the first Dutch invaders of the Americas: “Just as Conqueror Henry Hudson raided Manhattan, kidnapped Lenape Indians and hijacked their public lands, Moskowitz does the same today. With HSA charters, she takes over public school spaces and dollars as well as hijacks our community’s right to democratic school governance.” Interloper Moskowitz has arrogantly denounced the protesting parents and teachers as folks who “don’t want change and don’t want great schools.”

The picket vociferously denounced this charter-school hijacking and privatization of public schools that is fomented by the DOE. They alternately shouted, “Better Public Schools, Not Private Charters! Money for Public Education, Not Privatization! One City, One School! Stop the Drive to Privatize!”

Jitu Weusi, a member of the Coalition for Public Education, said, “Our protest shows that the public school community sectors are beginning to wake up and exert their voice for collective school governance. It’s a struggle between the attempt to privatize public education and an attempt to keep education public and equal for all — one system for all people. Not this stratified, a privatized system, creating classes within the community. ” Weusi urged parents to get involved and to take a firm stance against these charter school invasions, their attempt to privatize and to sow divisions among our people.

Sonia Harris shared her insights, “Unfortunately disparity is suffered by our children. They will grow up thinking that this group is better than that one. It is not a good picture. Charters need to be regulated. Let’s mobilize and organize. We can do it. Make sure that everyone is served properly. That’s what Martin Luther King died for.” Hopefully, the irresponsible DOE Officials will heed the words of this humble parent and learn a lesson in justice and democracy.

“Beware of those DOE-Charter-School wolves in sheep’s clothing who bear gifts of donuts, drinks, hors d’oeuvres and live music!”