Press Release 3/25: Fight Back Friday, School-Communities Across the City Fight Back Against Budget Cuts and Proposed Lay-offs

Posted by The Inconvenient Truth Behind Waiting For Superman ⋅ March 25, 2011 ⋅ 3 Comments 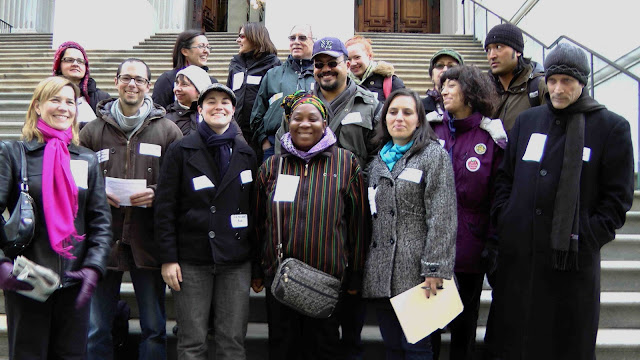 Fight Back Friday:  After More Than a Week of Protests and Outrage, School-Communities Mobilize to Demand Our Governor and Mayor Put Our Children First

Today parents, students, teachers, and community members across the city took differentiated actions to demand our Mayor and our Governor put our children first.  Education stakeholders city-wide protested Mayor Bloomberg’s destructive education policies, including his threat of over 4,000 teacher lay-offs and his attacks on our experienced educators, as well as Governor Cuomo’s devastating proposed education cuts.  Individual schools picketed, signed petitions and letters, held teach-ins, engaged in teacher appreciation activities and disseminated flyers to spread awareness about budget cuts, proposed lay-offs, teacher protections, and what our Mayor and Governor should be fighting for if they were really interested in putting children first.


“On Thursday, March 24th thousands of average New Yorkers expressed their outrage against Bloomberg, a failed public ed system, Cuomo, Wall Street  banksters, and the ‘givebacks’ and job losses being set in motion with the help of city and state legislators. One day later, during another Fight Back Friday, parents, teachers, students and community members around the city continued that struggle at their respective schools, more confident than ever, that in unity there is strength.” Muba Yarofulani & Akinlabi Mackall Co-chairpersons,Coalition for Public Education / Coalicion por la Educacion Publica.


Tory Frye, parent at PS/IS 187 said, “Last year my son’s elementary school lost the art teacher and the science teacher to budget cuts.  The music teacher has no music room or instruments; there is no dedicated room for art and class sizes are uncomfortably high.  We lost 7 faculty members altogether last year and now we are being told that we will lose another 5 teachers?  There is no one left at my son’s school to cut!  I cannot begin to understand how we can allow budget cuts like the ones proposed by Governor Cuomo and supported by Mayor Bloomberg to occur, this is not putting our children first. There is a solution; we can maintain the tax on millionaires and billionaires, which would mitigate the impact of these budget cuts and simultaneously address the growing income disparity that sadly has come to characterize New York City.”


Continued Sam Coleman, teacher, “My elementary school, PS 24, has lost over $1 million in the last year to budget cuts. Our school is made up of largely immigrant, working class and poor students of color. Due to budget cuts, students in our school have lost after school programs, arts programs, teachers and materials. It is morally and ethically unjustifiable for the mayor and governor to take these resources away from our families while granting millionaires and billionaires tax breaks. Poor and working class families of color and immigrants should not have their children’s education short-changed in order to pay for a new yacht, or a new summer home for the wealthiest citizens of our city and state. Fight Back Friday’s are a way for school communities to come together – parents, teacher and students – to say enough is enough. We are united in this fight, and we are not going to sit by quietly anymore.”


“We have witnessed the privileged few dominate the education conversation over the last year and we have seen our elected leaders capitulate to their interests over the needs of the more than 95% of us who are not millionaires and billionaires, most notably our children, more than 20% of whom are living in poverty.  This week we have learned that Governor Cuomo accepted tens of thousands of dollars from the Koch brothers, individuals who seek to dismantle our democracy and protections for the average American.  We have seen our Mayor spend millions of his own money to promote his own policy interest against the wishes of the overwhelming majority of New Yorkers who want the millionaire tax left in place and who support experienced educators.  We do not live in an oligarchy or a plutocracy where the privileged few get to make decisions for the rest of us, we live in a democracy where representatives are supposed to serve those who elected them.  We will fight for our children, for public education, for workers rights, and for the promise of a democracy and an elected leadership that truly represents the will of the people,” said Julie Cavanagh, teacher at PS 15 in Red Hook, Brooklyn.


Casey Fuetsch, public school parent at the Earth School added, “It’s ironic and disturbing that, on this 100th Anniversary of the Triangle Shirtwaist Factory fire,  we are still fighting to keep the most basic rights of mostly female workers intact.  One hundred years ago it was a safety issue; this year it is common respect and job security for teachers.”

Fight Back Fridays began last June when school communities united to fight proposed budget cuts and other disastrous educational policies.  Over the course of this school year, Fight Back Fridays have continued throughout the city.
“John Dewey H.S. is continuing our Fight Back Friday actions to unify our school community in the face of a city-wide and national campaign to discredit teachers, destroy seniority rights, and sabotage our public schools. Labor rights are civil rights and these are rights that we must fight to protect for the sake of our students and the future of public education. Our goal is to make our school better and stronger by keeping teachers teaching and helping our students receive a dynamic and quality education,” said Michael Solo, Dewey teacher.
Rosemarie Frascella of NyCORE and teacher at Prospect Heights High School said, “Fight Back Fridays give educators the agency to design their own way of organizing around the issues that are directly affecting our students, classrooms, and communities.  We are organizing Fight Back Fridays to educate and organize our communities around the issues directly affecting our school communities.  From Wisconsin to New York City teachers are coming together to stand up for quality education for every student across the United States.  Our working conditions are our students’ learning environments.”
Added Stefanie Siegel, teacher, Paul Robeson High School in Brooklyn, “The Coalition for Public Education (Brooklyn Chapter) has been meeting with students and staff on Tuesdays for the past two months.   Their consistency and resiliency keep us engaged and believing that justice will prevail after all.  The work has empowered, politicized and raised the consciousness of  students and we hope, if nothing else, the teach-in on Fight Back Friday spreads the word and broadens our impact.   The presence of the CPE at Robeson has made us feel as if we are part of a bigger picture, a larger cause as well as a global community.”
Participants in Fight Back Friday and parents, educators, and students across the city have expressed immense frustration with the Bloomberg administration for attacking teachers and seniority rights, using parents and teachers as political footballs with threats of massive layoffs rather than seeking to find a solution to Governor Cuomo’s misguided budget cuts.  Fight Back Friday participants and stakeholders across the city have demanded an end to wasteful city contracts such as CityTime and ARIS, for the state to continue the fair tax on Millionaires and Billionaires, for the DOE to cut middle and upper management at the DOE instead of further cutting school-based budgets and to prevent teacher layoffs, to stop wasting money on over-testing and for our local and state elected officials to do the hard work of putting our children first, by protecting and preserving public education.
“Our community believes in high quality education. However, over-testing has not proven to be effective. We need local community engagement and control that requires high standards for our schools,” Harvey Epstein Denise Soltren The Neighborhood School PTA Co Presidents.
Lisa Donlan, President of CEC1 concluded, “Parents and teachers have come together to send a message in their school communities and to the city at large that the budget cuts, the attacks on teachers, the misuse of high stakes testing and increase in class sizes MUST STOP if we are to deliver on the promise of tomorrow that is our children’s education TODAY. Cheating these kids, schools and communities hurts all of us, now and in the future. We will fight back today and every day until our city gets what it deserves-  adequately funded and staffed, good, public schools in every neighborhood!”

« Next GEM Meeting March 21: From Wisconsin to Puerto Rico to New York
Film Screening & Discussion, Apr. 11: The Inconvenient Truth Behind ‘Waiting for Superman’ »

3 thoughts on “Press Release 3/25: Fight Back Friday, School-Communities Across the City Fight Back Against Budget Cuts and Proposed Lay-offs”