Posted by The Inconvenient Truth Behind Waiting For Superman ⋅ December 1, 2010 ⋅ 3 Comments

The Grassroots Education Movement (GEM) is a New York City based group that educates, organizes and mobilizes educators, parents, students and communities to defend public education against the corporate and government policies that underfund, undermine and privatize our public school system. GEM advocates both within and outside the UFT for the equality and quality of public education services and the rights of school workers. (Read more). Check out our points of unity and our blog. (http://grassrootseducationmovement.blogspot.com/) 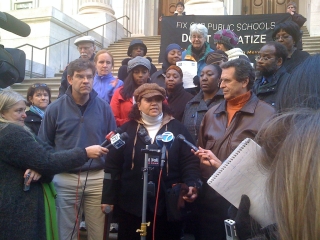 Join parents and educators as they challenge Steiner’s approval of Cathleen Black as NYC Schools Chancellor:


Thursday, Dec. 2, 4pm:
Who:  Parents, students and teachers, WEAR RED on Thursday in protest and join us at our rally to demand an chancellor who:
1. HAS EDUCATION EXPERIENCE
2. BELIEVES IN PUBLIC EDUCATION
When: Thursday, December 2, 4:00PM
Where:   Tweed, DOE Headquarters
Trains – 4,5,6,N,R,J to City Hall
2,3 to Park Place
A,C,E to Chambers Street

Coming to a school near you: Higher Class Sizes and Teacher Excessing: Are You Next???
NYC Public Schools are Under Attack!
NYC public schools are already criminally underfunded and school-based budgets have been cut by over $400 Million since 2008!
More cuts mean fewer teachers, less resources, and fewer programs for our students. Budget cuts mean more teachers will lose their positions and become part of the growing pool of ATRs

Tuesday, December 14, 5:30 p.m.
Panel for Educational Policy meeting, details to follow on the GEM blog
______________________
What’s on the GEM Blog:
Rally at Sheepshead Bay High School in Brooklyn against another Bloomberg/Klein school closing:
http://grassrootseducationmovement.blogspot.com/2010/11/rally-at-sheepshead-bay-hs-brooklyn.html
The Real Reformers stand up at the November 16 PEP:
http://grassrootseducationmovement.blogspot.com/2010/11/pep-nov-16-real-reformers-stand-up.html
Articles of Interest:
(These articles reflect the opinions of the authors, and not necessarily those of the Grassroots Education Movement (GEM) as a whole)
A Special Education teacher from PS 15 in Brooklyn (and a GEM member) Julie Cavanagh explains what’s wrong with the Teacher Data Reports: “Not Making the Grade”
http://www.huffingtonpost.com/julie-cavanagh/not-making-the-grade_b_778002.html
Harlem elementary teacher Brian Jones debunks the education de-formers claim to the mantle of civil rights and Arne Duncan’s claim that the film Waiting for Superman constitutes a “Rosa Parks moment”:  “Charter Schools and Civil Rights:  What Kind of Movement is This?”  http://www.huffingtonpost.com/brian-jones/charter-schools-and-civil_b_757792.html
______________________________

After serving the community for over 100 years, our space and programs are being threatened. Eva Moskowitz wants a new private HSA Charter School to co-locate in the PS/MS 165/Mott Hall 2 Campus and over time phase out these three outstanding public schools.P.S./M.S. 165 is renowned for its model Dual Language program, Gifted and Talented Program, and programs for students with special needs. It has a long history of community enrichment. It is not a failing school. Yet, a charter school without this long history of success wants to deprive P.S./M.S. 165 and Mott Hall II of space and resources in order to implement their own programming.” The school’s community rapidly mobilized and loudly opposed the Moskowitz Charter at their Community Education Council – CEC3.

See videos of the PS 165 fightback and of the CEC3 meeting at the GEM blog:
http://grassrootseducationmovement.blogspot.com/2010/11/ps165-cec3-no-to-charter-invasion-pt1.html

NOTE: The PS 165 fightback against Harlem Success seems to have been working and Moskowitz is shifting towards recruiting white middle and upper class students by aiming for space in Brandeis HS, which is closing down.

We couldn’t make this up:

Gates gives policy advice
Bill Gates has some advice to state superintendents on how to deal with their budget crises.  Don’t reward teachers for Master’s Degrees.  Those don’t matter, nor does seniority.  Bill Gates “also urges an end to efforts to reduce class sizes” and “You can’t fund reforms without money.  And there is no money.”  I guess that’s where his own foundation’s $30 billion (with another $30 billion on the way from Warren Buffet) comes in…..

http://www.nytimes.com/2010/11/19/us/19gates.html?_r=1
GEM makes the Wall Street Journal (we must be doing something right!)
From the Wall Street Journal editorial of October 5, 2010.
The odd complaint is that donors to charter schools include some hedge fund managers.
Or maybe not so odd. Teachers unions and the public school monopoly have long benefitted from wielding a moral trump card. They claimed to care for children, and caring was defined solely by how much taxpayers spent on schools.
That moral claim is being turned on its head as more Americans come to understand that teachers unions and the public bureaucracy are the main obstacles to reform. Movies such as “Waiting for ‘Superman'” and “The Lottery” are exposing this to the larger American public, leaving the monopolists to the hapless recourse of suggesting that reformers are merely the tools of hedge fund philanthropists.
The Manhattan protest was sponsored by the Grassroots Education Movement, which was co-founded by Norman Scott, a retired public school teacher. Mr. Scott says the group has nothing to do with the United Federation of Teachers, and that it’s comprised of New York City teachers and parents who have been “adversely affected by charter schools.” Mr. Scott told us he and several others are developing their own film, “The Inconvenient Truth Behind Waiting for ‘Superman.'” That’s a nod to Davis Guggenheim, who directed Al Gore’s climate change documentary before he did “Superman.”
We saw a trailer for this anti-“Superman” film, which denounces most of the leading advocates for charter schools. The irony is that most of those criticized are Democrats or noted liberals who’ve been mugged by public school reality.
Check out the trailer for “The Inconvenient Truth Behind Waiting for Superman”:  http://www.waitingforsupermantruth.org/

The movie premiers this January. If you’re interested in showing the film at your school or having a film party in your home, contact GEM at gemnyc@gmail.com
—
GEMNYC
GEMNYC@gmail.com
http://grassrootseducationmovement.blogspot.com/

« Join Us For Our Next Meeting on December 7th!
John Dewey HS Fights Back »