Posted by The Inconvenient Truth Behind Waiting For Superman ⋅ June 10, 2010 ⋅ Leave a comment 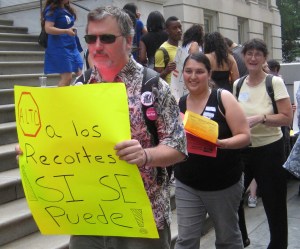 MORNING PICKET AGAINST THE BUDGET CUTS!

STAND UP FOR JOHN JAY STUDENTS!

Who: ALL THREE SCHOOLS in the John Jay building!
Where: In front of the school!

A group of teachers from Research and Law (not sure about Journalism) have been meeting to discuss the devastating effect the budget cuts will have on the 2011 school year, summer school, and in general, the attacks on public schools. We discussed the role charter schools have on the privatization of PUBLIC education, how public schools, especially inner-city schools with students of color, have historically been under-funded and now face even more cut backs as city, state, and federal governments try to solve the current economic crisis on the backs of teachers, students, and other working people.

OUR STUDENTS DID NOT CAUSE WALL STREET’S CRISIS. THEY SHOULD NOT PAY FOR IT!

We need to STAND UP and DEMAND that our SCHOOLS get bailed out, not Wall Street!

Please join us tomorrow morning 7:30-8:00 am in front of the school to protest these cut backs and to demand FULL FUNDING for public schools!

The other schools don’t start school until 8:30, so they are coming early to accommodate SSL’s 8 am start-time. SO WE HAVE TO BE THERE FULL FORCE!!!!!

I will be picking up coffee and doughnuts! SEE YOU THERE!

Check out photos and reports from similar protests from the 25 NYC public schools that picketed their schools June 4 at the Grassroots Education Movement’s website – http://grassrootseducationmovement.blogspot.com/2010/06/june-4-tweed-protest-against-budget.html