Posted by The Inconvenient Truth Behind Waiting For Superman ⋅ June 6, 2010 ⋅ 1 Comment

About 30 teachers, parents and students participated in the protest in front of PS 197M on Friday June 4th, 2010, day of Public School protests against budget cuts around New York City. We blocked one traffic lane directing cars and buses to the center lane. We heard a lot of Solidarity honking from drivers passing by. We were carrying posters saying, NO MORE BUDGET CUTS! CHARTERS BRIBE, PUBLIC SCHOOLS TEACH! PARENTS-TEACHERS UNITED WILL NEVER BE DEFEATED! CHILDREN FIRST, NO CUTS IN EDUCATION! HANDS OFF TEACHERS, NO TO LAYOFFS! GOOD BYE DEMOCRACY PREP! We distributed the flyers from GEM-NYCore and the Truth about Charter Schools in New York City to pedestrians. They went like hot potatoes. It was a real collaborative work among parents and teachers. 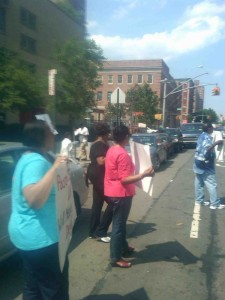 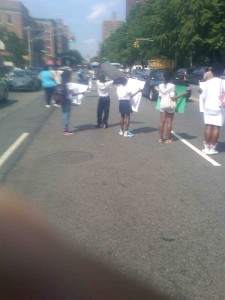 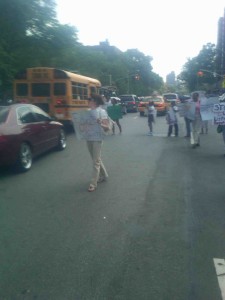 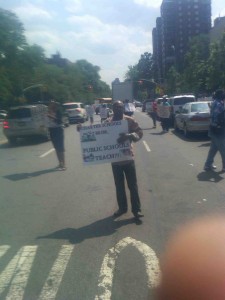