Posted by The Inconvenient Truth Behind Waiting For Superman ⋅ April 2, 2010 ⋅ Leave a comment
Click on title for Video #1 of Rafael Feliciano’s FMPR presentation.
and for Video #2 go to — http://www.youtube.com/watch?v=2DPAxKBlcjA

On March 23, CUNY Grad center, Grassroots Education Movement for Public Education, GEM held a public discussion with Rafael Feliciano President of the Teachers Federation of Puerto Rico, FMPR. In attendance were numerous education activists and community organizers. The purpose of the discussion was to learn from the experiences of the FMPR in defense of Public Education in Puerto Rico and the experiences of GEM and other education activists here in NYC. In order to build on our strengths, our mutual solidarity in our struggle against the neoliberal agenda.

Lisa North representing GEM, spoke how GEM came about around educational issues, such as high stakes testing, absent teacher reserve (ATR’s), closing of public school, elimination of seniority rights, mayoralty control, underfunding of schools, the privatization of education. In the Spring of 2009, GEM was directly involved in the struggle against Harlem Public Schools take over by the Eva Mascowitz, Charter School consortium and also in the Charter School invasion in Red Hook, Brooklyn, PS 15. GEM wanted to deal with the truth about school closings and the need to organize school committees to defend their own schools.

Rafael Feliciano President of FMPR, started his talk on the history of FMPR, back in 1992-1993 one day strike to stop the formation of Charter Schools in Puerto Rico. Feliciano spoke from the perspective of Puerto Rico 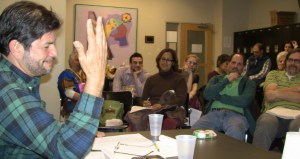 Rafael Feliciano also reflected on the powerful strike by the FMPR in 2007-2008, a strike that lasted for 10 days in which 25,00 teachers participated with strong support by parents, the strike ended in victory. The Department of Education of PR, had to reverse their decision to organize Charter Schools. He added that the struggles we are facing here in the US are very similar to their struggle in PR, privatization, high stake testing etc..

In his talk Feliciano spoke of the difficulties in organizing, because parents change every year, teacher support varies. Given that teacher’s salary are low in PR, that many teachers live in the community, and that the community views teachers as leaders, the barriers that exist between the teachers here in the US and their communities do not exist in Puerto Rico.

Brother Feliciano spoke about the attempted raid of their union by the Service Employees International Union-SEIU and the attacks by the AFT, both collaborating with the colonial government of Puerto Rico attempts to destroy the political independence of a grassroots union like FMPR.

Feliciano also spoke from the perspective of being a socialist and the importance of schools developing the struggle and demands of the working class. He spoke of the importance of breaking the barriers that exist between parents and teachers, between teachers and the community where the school is located. The importance of breaking down the UFT type limitations, such working with all the workers in the same school, cafeteria workers, custodial workers all is one representing the interest of public education. He added of the differences that exist in the level of political and social consciousness, that these limitation can be overcome by organizing small committees to start with of all the different groups in a school and most important uniting the school struggle with the struggles of the community, housing, transportation, employment.

Rafael spoke about the prominence that most be given to a grassroots movement, direct contact with the people, if “you don’t have direct contact in a define place, then you are not doing work” he said, in spite of demonstrations, forums etc.

The next part of the agenda was the question and answer period, the meeting room was very crowded, a sister in place spoke about introducing humor, music, culture in the meetings, people spoke about the particulars here in the US, the race and cultural diversities, the need to relate to different communities, the need to defend militants and to celebrate victories, the idea of visiting parents at their homes, some people don’t use computers. Others spoke of using local community organizations here in NYC, like La Peña del Bronx, that have a history of experience in organizing in the communities . A person from the March 4th. Coalition spoke about the possibility of 15,000 teachers in NY Sate loosing their jobs. Others raise the question of business unionism here in the US. People spoke about the UFT undemocratic practices, and the coming elections.

Overall, the audience was very happy by the presentation of Rafael Feliciano. His emphasis on rank and file organizing, face to face organizing, building from below, start small, consistency and most of all to believe in your values, respect for working people and sincerity in wanting to represent the best interest of the people.