Posted by The Inconvenient Truth Behind Waiting For Superman ⋅ March 29, 2010 ⋅ 1 Comment 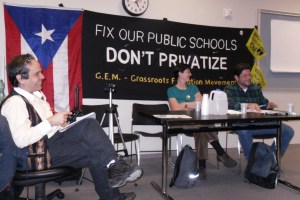 Click on title for video of Lisa North’s presentation on GEM.

On March 24, 2010, a group of forty New York City educators and activists attended a meeting of the Grassroots Education Movement (GEM) to hear Rafael Feliciano , president of the Federacion de Maestros de Puerto Rico (FMPR), speak about how to build a movement to defend public education. Lisa North and Angel Gonzales from GEM also spoke about how teachers in New York City are trying to build a movement here to fight against school closings and charter schools. Feliciano pointed out how the struggle in Puerto Rico and NYC are similar and how we can learn from each other.

In 2008, after the government of Puerto Rico refused to agree to a collective bargaining agreement with teachers, the FMPR decided to strike for better wages, better conditions at schools for both teachers and students, and to stop the privatization of public schools in the form of charter schools. The militant ten-day strike forced the government to agree to a compromise that kept charter schools of the island.

The fight against charter schools, Feliciano said, is important in both Puerto Rico and the United States because these struggles have the potential to unite many people and create a place to develop solidarity. In fact, the 2008 strike in Puerto Rico was called a “people’s strike” because the FMPR sought widespread support among parents, students, workers, and university

But to build for a successful strike, or citywide protests and rallies, activists have to build a base of support. Feliciano pointed out that before you have mass actions, you need to form one-to-one relationships at the school level. “We in Puerto Rico make big struggles, but these big struggles came from smaller struggles in schools”

Schools, Feliciano said, are places where teachers can make important links with not just teachers, but support staff like cafeteria workers as well. “I am president of a union. I am also a socialist,” Feliciano told the audience. “What I have learned after all these years is that a school is a strategic place to develop the struggle of the working class.”

Feliciano told the assembled teachers that a real grassroots struggle starts with these one-to-one conversations and that radical teachers should use the openings created by charter schools and school closings to unite with other radicals and to talk about politics with other workers.

After Feliciano was finished, people in the audience asked questions and spoke about the struggles they are a part of. Many GEM members thanked Feliciano not only for taking the time to speak to us, but because the experiences of Puerto Rican teachers can point a way forward for our struggles here in the city. Teachers spoke about the difficulty of building in our schools, especially when teachers are under attack, and asked questions about how to reach out to parents and the community. Feliciano replied with what was the obvious theme of the evening – that big struggles start with smaller ones. That we have to be activists every day in our schools where we need to build a base of support in order to launch the larger struggles necessary to fight back the attacks on our schools. “You don’t have any power,” Felicano said, “if you don’t build it from the bottom.” Grassroots Education Movement members invited the audience to be a part of GEM to help us build a successful movement here in New York City.