Posted by The Inconvenient Truth Behind Waiting For Superman ⋅ March 15, 2010 ⋅ 217 Comments 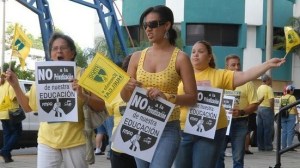 In 2008, after a militant 10 day strike, the FMPR stopped the charter school privatization threat on the island-nation. Despite the Puerto Rico laws against public worker strikes, the FMPR (80% women) continues to represent and fight back as a democratic bottom-up rank and file union. Today the FMPR again resists privatization, charters invasions, violations of teacher & public worker rights, cutbacks and massive layoffs. As more draconian cutbacks loom, the FMPR leads protests along with debates on how to successfully build a united struggle nationwide.

In NYC, GEM has campaigned against the very same destructive federal government “No Child L

Over decades, the FMPR has worked to empower their members and school communities. The FMPR supports school teacher-parent-student committees with significant input. FMPR union chapters have autonomy and are supported when militant job actions are necessary. The FMPR consistently seeks to educate and organize through general meetings, educationals, media campaigns, litigation, legislative initiatives, guerrilla theater, militant job actions and more.

The FMPR model of social justice unionism provides many lessons for us here. We too have much to share. Join us in this important dialogue.

« The Impact of Charter Schools & School Closings on Public Education and What We Can Do About It
Same Struggle, Same Fight: President of Puerto Rico Teachers’ Union (FMPR) Speaks with GEM! »