Mayoral control is not yet law

Posted by The Inconvenient Truth Behind Waiting For Superman ⋅ August 10, 2009 ⋅ Leave a comment 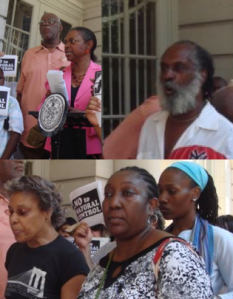 UPDATE:
See the long article on this press conference in the Amsterdam News.

The Coalition for Public Education made it clear today that until the State Assembly approves the bill the Senate passed last week, New York City still has a “decentralized system of education as enacted in 1969,” not mayoral control. “All reports to the contrary are false and misleading.”

Police rule in the schools
Criminalization of children
Continuation of the classroom to prison pipeline
Excessive high stakes testing
Crowded classrooms
Crumbling public schools
Harassment of veteran teachers
The notorious “Rubber Room”
Reckless and excessive spending of public money
Excessive daily absence of pupils from schools
Using charter schools as a means to privatize public schools
No educational leader of NYC Public schools
No discussions, no debate, no democratic tradition
No science and computer labs in all schools
Charters in minority neighborhoods with all white staffs

“For all these reasons and more, we say No to mayoral control,” Wiesu said. “We shall make this a political issue.”

State Sen. Velmanette Montgomery, one of the eight legislators who voted against mayoral control last week, said the system we see today resembles what “we waged a war against 30 years ago.” There is no parent voice, and with the dismantling of the decentralized system we had in 2002, we have lost educators at the district level. There are no African-American men in decision-making positions in the system.

Ellen Raider (of ICoPE) spoke of three violations of human rights under this mayor: the full development of each individual child, the full participation of parents and community in education decision-making, and having a grievance procedure with transparency.

“Education is one of the key issues that ensure the continuation of our existence,” said lawyer and political activist Roger Wareham, who belongs to the December 12th Movement, which organizes in the Black and Latino community around human rights violations.

Monique Indigo Washington, speaking for City Council member Charles Barron (Dist.42), was concerned about the 100,000 students pushed out of the system, what she called the “out-of-school youth.” We’re building a grassroots movement to fight mayoral control that’s “going into the summer, into the year.” To communities where charter schools are being installed in public schools: “Do not fall for the game.”

Among the other speakers were activist and scholar Sam Anderson (Black Educator blog): “We are opposed to mayoral control in every form,” and Mark Rodriguez of the Political Parent Party, who is running for the State Assembly.

« Charter school hearings this week in the Bronx
Disparate bills signed into law? »